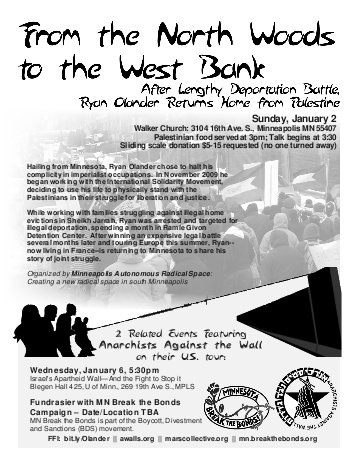 From the North Woods to the West Bank
After Lengthy Deportation Battle, Ryan Olander Returns Home from Palestine

Sunday, January 2
Walker Church: 3104 16th Ave. S., Minneapolis MN 55407
Palestinian food served at 3pm; Talk begins at 3:30
Sliding scale donation $5-15 requested (no one turned away)
Hailing from Minnesota, Ryan Olander chose to halt his complicity in imperialist occupations.  In November 2009 he began working with the International Solidarity Movement, deciding to use his life to physically stand with the Palestinians in their struggle for liberation and justice.

While working with families struggling against illegal home evictions in Sheikh Jarrah, Ryan was arrested and targeted for illegal deportation, spending a month in Ramle Givon Detention Center.  After winning an expensive legal battle several months later and touring Europe this summer, Ryan–now living in France–is returning to Minnesota to share his story of joint struggle.

2 RELATED EVENTS featuring ANARCHISTS AGAINST THE WALL on their U.S. tour:

Wednesday, January 6, 5:30pm
Israel’s Apartheid Wall—And the Fight to Stop it
Blegen Hall 425, U of Minn., 269 19th Ave S., MPLS
Anarchists Against the Wall (AATW) has been at the forefront of the Israeli solidarity movement which has joined the Palestinian popular resistance to the wall.

Sunday, January 9, dinner at 6pm, talk at 7pm
Fundraiser with AATW and MN Break the Bonds Campaign
2310 Snelling Ave, Minneapolis, MN (in the Seward neighborhood, near the LRT bike trail and Coastal Seafoods)
suggested donation $10 (no one turned away)
MN Break the Bonds is a state-wide campaign providing Palestine-centric education and calling on MN to divest from Israel Bonds as part of the Boycott, Divestment and Sanctions (BDS) movement. 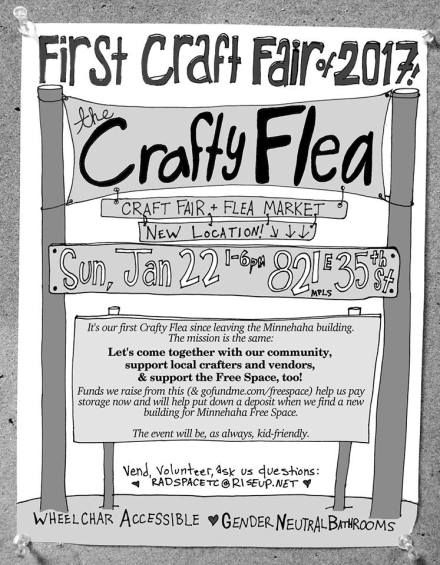