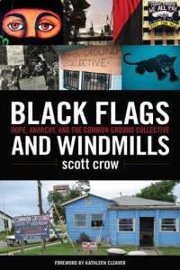 This is one story about Hurricane Katrina you probably haven’t heard. When both levees and governments failed in New Orleans in the fall of 2005, Scott Crow headed into the political storm, co-founding a relief effort called the Common Ground Collective. In the absence of local government, FEMA, and the Red Cross, this unusual volunteer organization, based on ‘solidarity not charity,’ built medical clinics, set up food and water distribution, and created community gardens. They also resisted home demolitions, white militias, police brutality and FEMA incompetence side by side with the people of New Orleans. Crow’s vivid memoir maps the intertwining of his radical experience and ideas with Katrina’s reality, and community efforts to translate ideals into action. It is a story of resisting indifference, rebuilding hope amidst collapse, and struggling against the grain. Scott Crow’s new book Black Flags and Windmills challenges all of us to learn from our histories and dream of better worlds. And gives us some of the tools to do so. Crow is crystal clear about what he wants: “I believe in fighting for, and building a world built on
collective liberation that is inclusive, sustainable and free of coercion and domination by the state or multinational corporate interests.”

“For decades scott crow has approached his political organizing with humility, resilience, and honesty, and he continues to do so in Black Flags and Windmills.”
—Will Potter, author of Green Is the New Red: An Insider’s Account of a Social Movement Under Siege