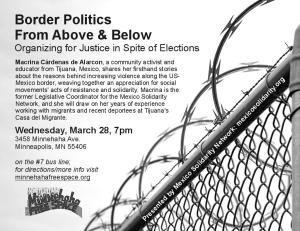 Border Politics From Above & Below:

Organizing For Justice in Spite of Elections

In what is sure to be a multibillion dollar run-up to the 2012 elections in the US and Mexico, it’s important to reflect on alternative ways of framing social problems and doing politics. In response to the failing US economy, many community groups are demonstrating another way of doing politics by constructing local, collective power from below. In Mexico, social actors and large mass movements are also organizing from below to challenge the power structures that have implemented a ruthless drug war on an increasingly impoverished population.

More than just bloody turf wars between competing cartels, the current conflict in Mexico is shaped by the effects of neoliberal free trade, widespread political class collusion and corruption, massive amounts of US military funding, and the insatiable appetite for drugs north of the border. Macrina will draw on her experience as the former Legislative Coordinator of the Mexico Solidarity Network and her current work with the Casa del Migrante in Tijuana, Mexico, to unpack this complex situation.

Border towns such as Tijuana and Ciudad Juarez are caught between a rock and a hard place. On one hand, decades of maquiladorization have left border towns heavily invested in boom-and-bust industry that can all too easily move across the world in search of cheaper labor. Left without jobs in Mexico or in a depressed US economy, migrants arrive in Tijuana to find their “American Dream” has died before it ever started. Meanwhile, many young people turn to cartels as the only remaining option.

On the other hand, the US-funded, 1.4 billion-dollar Merida Initiative is supporting a Mexican military fraught with corruption and human rights abuses, while also undermining the same military by selling cartels US-made arms and laundering their money in the US. For this reason it’s common to hear Mexicans say that in this war on drugs, the United States provides the weapons and Mexico provides the dead (Los EEUU pone las armas y México pone los muertos).

Join Macrina Cárdenas de Alarcon and the Mexico Solidarity Network for an in-depth discussion of the current situation, one that weaves together a political analysis of the conflict, an appreciation for social movements’ acts of resistance and solidarity, and Macrina’s firsthand stories from life in Tijuana.

Macrina Cárdenas de Alarcon of Tijuana, Mexico, is the former Legislative Coordinator for MSN in Washington DC, Macrina coordinated dozens delegations to Juarez, including the first ever delegation of US congresswomen and men. She also spent over ten years organizing to end the femicides, with MSN and with various organizations led by families of femicide victims such as Justice for our Daughters, Return our Daughters Home, Women in Black, and Amnesty International. Macrina will draw on her this vast experience in addition to her current work as a community activist and educator in Tijuana with the Casa del Migrante where she aids recent deportees as well as women and men preparing to migrate to the US.

The Mexico-US Solidarity Network (MSN), based in Chicago’s Albany Park neighborhood, is dedicated to popular education and autonomous community organizing. The central work of the Mexico-US Solidarity Network is in impoverished and exploited communities on both sides of the Mexico-US border.  In Chicago, the Albany Park Autonomous Center is building strong community through innovative education and organizing processes directed by immigrants.  In Mexico, the Network works in solidarity with communities struggling for housing, land, democracy and human rights.