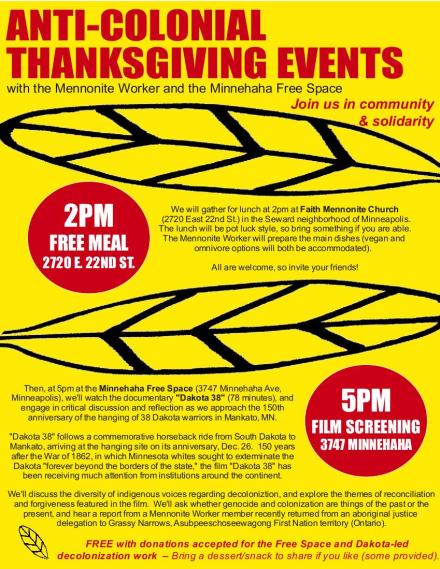 We will gather for lunch at 2pm at Faith Mennonite Church (2720 East 22nd St.) in the Seward neighborhood of Minneapolis.  The lunch will be pot luck style, so bring something if you are able.  The Mennonite Worker will prepare the main dishes (vegan and omnivore options will both be accommodated).  All are welcome, so invite your friends!

(Faith Mennonite is near bus routes 2, 7 and 9 – remember holiday schedules.)

5pm: “Dakota 38” Screening & Facilitated Discussion
Minnehaha Free Space, 3747 Minnehaha Avenue, Minneapolis
FREE with donations accepted for the Free Space and Dakota-led decolonization projects
Bring a dessert or snack to share if you like (some provided).

We’ll watch the documentary “Dakota 38″ (78 minutes), and engage in critical discussion and reflection upon the film, as we approach the 150th anniversary of the hanging of 38 Dakota warriors in Mankato, MN.

“Dakota 38,” produced by Smooth Feather Productions, follows a commemorative horseback ride from Lower Brule, SD to Mankato, MN, arriving at the hanging site on the anniversary of the execution.  150 years after the War of 1862, in which Minnesota whites sought to exterminate the Dakota “forever beyond the borders of the state,” the film “Dakota 38” has been receiving much attention including screenings in museums and historical societies around the continent.

We’ll discuss why some Dakota voices are deemed appropriate by such institutions, while others continue to be shut out, and explore the themes of reconciliation and forgiveness featured in the film.  We’ll ask whether genocide and colonization are things of the past or the present, and hear a report from a Mennonite Worker member recently returned from an aboriginal justice delegation to Grassy Narrows, Asubpeeschoseewagong First Nation territory (Ontario).  Join us in community and solidarity.

(The Free Space is on bus routes 7, 23 and light rail – remember holiday schedules.)