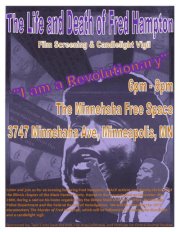 Come and join us for an evening honoring Fred Hampton, NAACP activist and deputy chairman of the Illinois chapter of the Black Panther Party. Hampton was assassinated on December 4th, 1969, during a raid on his home organized by the Illinois State Attorney’s Office, the Chicago Police Department and the Federal Bureau of Investigation. We will be screening the 1971 documentary The Murder of Fred Hampton, which will be followed by a community discussion and a candlelight vigil.

Twin Cities Save the Kids
www.savethekidsgroup.org