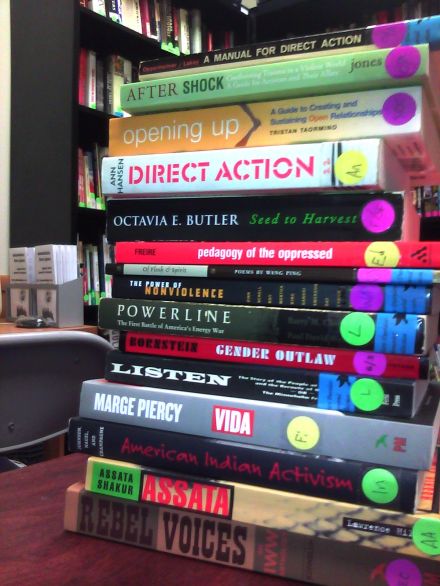 The first Read-Aloud Night was super – we heard some science fiction, a little bit of Hemingway, poetry, the story of some pigs who escaped their fate, the tale of a tiny but intimidating devil who lives in the plumbing and other good stuff.  There was delicious food from Sisters Camelot, plus some cookies.  It was so fun, actually, that we figured we’d hold another one.

This time we picked a theme – childhood, youth, being a kid, being a teen. Do you remember a book that really moved you when you were small, even if it wasn’t a “kids'” book? Or a book that shaped you as a teenager?  Do you have a favorite kids’ book or a favorite YA novel?  Or have you read something recently that has a lot to say about childhood or being young?   Bring something that was important to you when you were younger or something you’d like to share about being young – a story, a poem, non-fiction, theory, philosophy…Just make it something you really want to share!

You’re welcome just to listen, but if you’d like to read, plan on reading for no more than five minutes – do a trial run at home!  Kids are (naturally) welcome to listen or to read – not all readings will be “kids’ ” books or YA, though.  (And, of course, check what you plan to read – nothing racist, misogynist, transphobic, homophobic, hateful, etc.)

New Books at the Free Space Library
Here’s some more of the latest books just in at the MFS Library.  As always, you can browse our whole collection including recently added books via our LibraryThing page!

You Can’t Do That: Marv Davidov, Non-violent Revolutionary
Carol Masters and Marv Davidov, Nodin Press, 2009
The Free Space Library’s Marv Davidov Memorial Collection has over 450 books that used to belong to legendary Twin Cities peace and justice activist Marv Davidov, who passed away early last year.  But for a long time we didn’t have the book by Marv himself… until now!  Through interviews with activist and author Carol Masters, Davidov tells the entertaining, inspiring stories of his career as a grassroots activist in the civil rights, anti-nuclear and other movements, being arrested more than 50 times and dedicating himself to nonviolent revolutionary change.  Filled with humorous, powerful stories, this is a special book — so it’s not for check out from our library, but perfect for reading a chapter or two or more in our comfy chair after perusing the rest of our collection.

Take Back the Land
Max Rameau, AK Press, 2012<
In October 2006, a group of housing activists called Take Back the Land seized control of a plot of public land in Miami, Florida and built an encampment that would become known as the Umoja Village Shantytown, a living reminder of the lack of low-cost housing in the city, and a public protest against gentrification. Though the Umoja Village encampment lasted only a few short months, Take Back the Land’s actions inspired activists and observers around the country, shifting the conversation, re-politicizing the act of squatting, and helping to catalyze a new movement against the foreclosure crisis that continues to grow stronger as the economy continues to falter. This is the story of the Umoja Village Shantytown, told by its principal architect, the Haitian-born Pan-African theorist, campaign strategist, organizer, and author Max Rameau. Addressing the issues of land, self-determination, and homelessness in the Black community, Rameau explains the birth and development of Umoja Village day by day, and outlines the larger strategy behind the Take Back the Land movement.

We Have Not Been Moved: Resisting Racism and Militarism in 21st Century America
edited by Elizabeth Betita Martinez & others, PM Press, 2012
We Have Not Been Moved, produced in collaboration with the War Resisters League, is a compendium addressing the two leading pillars of U.S. Empire.   Among the historic texts included are rarely-seen writings by antiracist icons such as Anne Braden, Barbara Deming, and Audre Lorde, as well as a dialogue between Dr. King, revolutionary nationalist Robert F. Williams, Dave Dellinger, and Dorothy Day. Never-before-published pieces appear from civil rights and gay rights organizer Bayard Rustin and from celebrated U.S. pacifist supporter of Puerto Rican sovereignty Ruth Reynolds.  Additional new essays, interviews, poems, and other contributions from dozens of historical and contemporary anti-racist and anti-militarist activists in this 576 page volume.