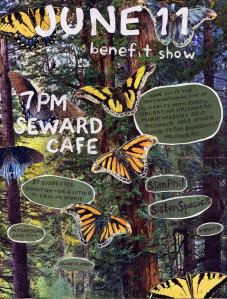 June 11 is the international day of solidarity with earth liberation prisoners Marie Mason and Eric McDavid, and other long-term anarchist prisoners. For more info, see: http://june11.org/

If you’re in the Twin Cities, join us for an evening of music, info and hangin’ out at the Seward Cafe! Featuring music by:

Marie Mason was arrested in March 2008 after her former partner – Frank Ambrose – turned informant for the FBI. Facing a life sentence if she went to trial, Marie accepted a plea bargain in September 2008, admitting her involvement in the burning of an office connected to GMO research and the destruction of a piece of logging equipment. At her sentencing in February the following year, she received a sentence of almost 22 years. More information on Marie’s case can be found at www.supportmariemason.org

Eric McDavid was arrested in January 2006 after being entrapped by a paid government informant – “Anna” – and was charged with a single count of conspiracy. Eric – who never carried out any actions and was accused of what amounts to “thought crime” – refused to cooperate with the state and took his case to trial. After a trial fraught with errors, the jury convicted Eric. He was subsequently sentenced to almost 20 years in prison. More information on Eric’s case can be found at www.supporteric.org