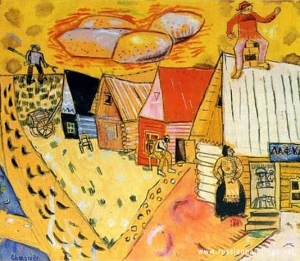 What’s the value of telling stories in poems and songs instead of just writing them up as stories?

Share poems, songs, and dinner with Martin Bidney, dialogic poet and translator. Bring a poem or song to share, or just come for the discussion!

“Dumplings” by Tchernikhovsky. Starting out in a lyrically-described Chagall-type Ukrainian village, we hear a Jewish grandmother discuss with her Russian Orthodox neighbor the sad decline of traditions generally. Gittel remembers her granddaughter’s childhood and adolescence while she makes the dumplings, and while the water boils she suddenly gets a letter that pulls modern politics into the equation.

Gumilev, a secular Russian writer, offers lyrical narrative of a pilgrimage of an 80-year-old to Mecca.

Three medieval Persian border crossers: Rumi rewrites the birth of Jesus, and Saadi offers a Jesus parable that Goethe translated for western readers. Hafiz, in the next century, writes a poem on the religion of love, which can be celebrated with equal ease in mosque, church, or tavern.

Storytelling songs could include ballads and condensed love stories:

Kids are welcome! A play room is available. Bathrooms are gender-neutral, and there is one that is disability accessible. Email radspacetc@riseup.net to request ASL or other disability accommodations.