Join us for the last “MARS Attacks” benefit at Sisters’ Camelot’s current location!

A portion of proceeds will be donated to the Women’s Prison Book Project. Of the approximately 2.4 million people incarcerated in the U.S., around 70% are people of color and about 200,000 are women, most of them mothers. WPBP provides much-needed reading materials for women and trans*-identified prisoners, building connections through the walls.  Visit wpbp.org to learn more.

Other proceeds will support the Minnehaha Free Space – now in its 8th month of existence.  Help keep the free space alive while dancing the night away!

Submit your Artwork to the First Art Group Art Show!

This upcoming Sunday (March 4th) you are invited to bring artwork to hang on the walls during our normal art group time of 6-9pm. We will be hopefully hanging the entire show that day, so come early and pick out a good spot. You can bring old work, new work, and/or work you made during the art groups. Please stay and help hang or work on more artwork. Then take a stack of art show fliers ( we have two great designs) and pass them out to friends, family and at places you visit around town. The art show opening:
Sunday, March 11th
6-9pm
At the Minnehaha Free Space
3458 Minnehaha Ave S
Minneapolis, MN
612-729-3733
Looking forward to seeing you and your artwork this Sunday! Let’s make this show a great one.

Radfam is a discussion group where you don’t have to justify your definition of family. The nuclear, biological family is not the norm here. Instead, we are interested in promoting individual autonomy in defining what family means. We discuss issues that are at the intersection of families and social justice. We are committed to supporting reproductive justice, queer politics and radical family planning, recognizing that these are concepts to be talked about and negotiated. We are interested in including, not excluding you so if there is something in this definition that raises a question for you, feel free to email radfamilies@gmail.com.

Come enjoy FREE MOVIES at the Free Space every Monday in March!
Featuring: Kanehsatake–270 Years of Resistance, You Got To Move, DHS
Give Us Back Our Children, and Sket. Movies start at 7pm. See
descriptions below.
END_OF_DOCUMENT_TOKEN_TO_BE_REPLACED

A benefit to help pay our rent! It’s a 7-Soup mixer! Come out to enjoy tasty soups, breads, and fun times.

Download the flier above (or a 1/4 sheet version here) and print it to help promote this fundraiser for the Free Space! (pro tip: real-world promotion works wonders) :-)

Join us on Friday, February 10th, 7pm-11pm, for Holey Moley, the first of potentially more fix ’em up skill share nights at the Free Space.

Bring clothing items that you want to patch, darn, or adjust, and some food to share if you are able.

We will provide some patching material, thread, needles, yarn & darning needles, and a sewing machine for careful use.

Share with others your favorite stitching methods, best reinforcement techniques, and other tips and tricks you’ve picked up over the years.

Come enjoy FREE MOVIES at the Free Space every Monday in February! Featuring: Happy Feet, The Coconut Revolution, Dead Man, and Cultures of Resistance. Movies start at 7pm. Arrive early for snacks and stick around for engaging discussions! See descriptions below…

Feb 6 – Kid’s Night! showing Happy Feet
Into the world of the Emperor Penguins, who find their soul mates through song, a penguin is born who cannot sing. But he can tap dance something fierce! Eat popcorn and other snacks and join the family fun!

Feb 13 – documentary: The Coconut Revolution
This is the modern-day story of a native peoples’ remarkable victory over Western Colonial power. A Pacific island rose up in arms against a giant mining corporation – and won despite a military occupation and blockade. The movie tells the story of the successful uprising of the indigenous peoples of Bougainville Island against the Papua New Guinea army and the mining plans of the Rio Tinto Zinc (RTZ) company to exploit their natural resources.

Feb 20 – movie: Dead Man
A dark, bitter commentary on modern American life cloaked in the form of a surrealist western, Jim Jarmusch’s Dead Man stars Johnny Depp as William Blake, a newly-orphaned accountant who leaves his home in Cleveland to accept a job in the frontier town of Machine. Upon his arrival, Blake is told by the factory owner that the job has already been filled. Dejectedly, he enters a nearby tavern, ultimately spending the night with a former prostitute. A violent altercation with the woman’s lover leaves Blake a murderer as well as mortally wounded. He flees into the wilderness, where a Native American named Nobody (Gary Farmer) mistakes Blake for the English poet William Blake and determines that he will be Blake’s guide in his protracted passage into the spirit world.

Feb 27 – documentary: Cultures of Resistance*
Directed by Iara Lee
Does each gesture really make a difference? Can music and dance be weapons of peace? In 2003, on the eve of the Iraq war, director Iara Lee embarked on a journey to better understand a world increasingly embroiled in conflict and, as she saw it, heading for self-destruction. After several years, travelling over five continents, Iara encountered growing numbers of people who committed their lives to promoting change. This is their story. Featuring: Medellín poets for peace, Capoeira masters from Brazil, Niger Delta militants, Iranian graffiti artists, women’s movement leaders in Rwanda, Lebanon’s refugee filmmakers, U.S. political pranksters, indigenous Kayapó activists from the Xingu River, Israeli dissidents, hip-hop artists from Palestine, and many more…
*A note on viewer discretion: this film is as intense as the struggles it chronicles. There are scenes of violence and graphic images that may be triggering for some. Please see http://culturesofresistance.org/ for more information on the film.

For more info on the free space, see https://minnehahafreespace.org/

Invite your friends and come on out for a booty-shakin’ fun time! 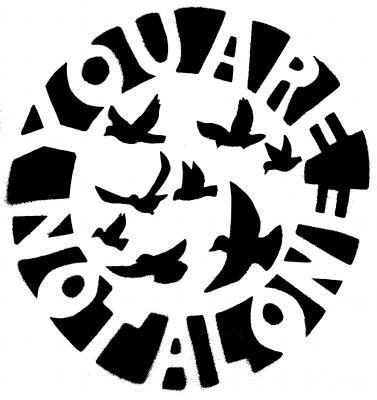 The Icarus group is a radical mental health collective interested in sharing experiences of navigating ‘dangerous gifts’, commonly bound down by medical definitions as ‘illness’.  Though building community and openly discussing mental health in a personal way, we help inspire, support and strengthen each other.  The core of the group is a regularly meeting support group, which is an open safe space.  Additionally, we hope to reach out to folks through activism, art and other projects to help expand the discussion of what mental health is in a world gone mad.
**find out more @ theicarusproject.net

Monday, January 9, 2012, 6:30pm until 8:30pm, at Minnehaha Free Space
Join us for a screening of the film, followed by discussion, including with someone who lived in one of the squats from the film. Come for free food at 6:30pm and the film at 7:00pm.

About the Film:
In economically turbulent times, rent and home-ownership have become unaffordable at best and impossible at worst. Thus, people all over the world continue a long tradition of reclaiming this basic human right by squatting. Shelter: A Squatumentary is a documentary film that explores the squatting movement in the East Bay from 2004 to 2007. We follow three examples of the struggle for housing in an unaffordable market such as that of the San Francisco Bay Area. Hellarity House, Banana House, and Power Machine are stories of squatters who have found one tentative solution to the ongoing housing crisis.